This page describes steps needed to run EasyDABv2 board in synchronized network mode. This mode allows boradcasters to extend transmission range of DAB multiplex by adding more transmitters to the network but not adding new frequencies due all transmitters are using same frequency and increases area of same nearby transmitter.

The ETI-parser block has been rewritten to extract TIST field, it keeps information about exact transmission time in milliseconds of current ETI frame. This time counted from the beginning of the second, that is tracked by PPS pulses from GPS receivers. There is also added free-run counter, which will be cleaned-up each 1PPS pulse. If this counter's value will be equal to TIST value, then DAB-frame will start transmitting. Then board repeats this step each frame. Frames that got too late in time will be skipped and not be transmitted. The board will wait for next frame and it's time to transmit. GPSDO 10MHz source is connected to the DAC's reference clock input and internally multiplied to 640MHz by PLL. The incoming samples frequency - is 8.000 MHz, which is used to request I/Q data and also as source for free-run counter.

Here is step-by step modification list, that must be done to enable SFN:

Unfortunaly one of my GPS receivers can't fully lock 10MHz to the satellites, so i'm waiting it's replacement to make real-life tests on-the-air. But it's 10MHz signal quality - is acceptable to start some lab tests and measurements. Delay of 1 PPS signal between two receivers - is less than 70nS, so it's much better than maximum delay between symbols of 300uS, that allowed by the standard.

The measuring equipment - is 200MHz oscilloscope with two rays. Yellow ray - is triggering source (trigger setted to video blank field, it's ok to capture null symbol this way). The blue ray - is another one board connected to the second GPSDO.

Here is oscillogram, where NULL symbols between two boards appears synchronously in the time. Next oscillogram shows more detaily view of start of NULL with 4us step (the equal waveforms of the end of previous symbol - are seen in this oscillogram):

Note, that after modificaions, the role of LED1 - will be changed, from now it will blink each time when NULL symbol transmitted (once per 96ms), so it can be used to track synchronisation between the boards. Two boards must blink synchronously.

Here is sample of the signal, received in the middle between two transmitters in the lab environment: 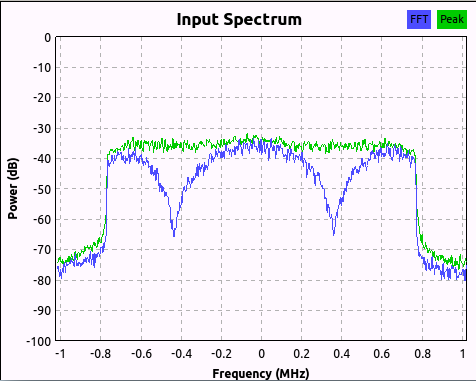 Got my second GPS-receiver with 10MHz OCXO. Just found the way of tuning delay between 1PPS signals of those GPSDO's. There is parameter "GPS:REF:ADELAY" that can be tuned to set specified "Antenna delay" of the receiver. This param allows to change delay between actual 1PPS and GPS outputted one. So running this command:

Adds exactly 3us delay to the 1PPS output. This indistrial GPSDO's option adds digital way to better tune DAB SFN signal. The synchronisation strategies are described on page 64 of EBU BPN 066 clause 5.2.3. This is basic How-To for choosing proper delay and distanse between transmitters for SFN. More-less good values for delay - are: -1.8us, -0.8us, -0.3us.

Good news: New sample rate has been presented. Previous filter 125/32 for samplerate of 8000kHz gave -3.14 dB at the shoulder's frequencies (± 768kHz), which makes signal visually less rectangular and more hyperbolar. But now there is better acceptable samplerate frequency: 3200 kHz. So now I'm started using 25/16 interpolation filter: 2048kHz -> 3200kHz. Which have only -1.02dB at the shoulders, and now output signal became more rectangular as before. 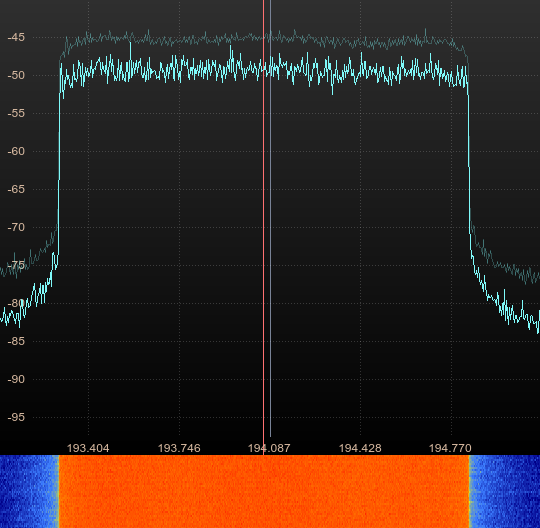 Rightnow i'm doing development of enchanced version of time comparator for DAB SFN. As written upper here - it was simplified, and did comparison between TIST values only. But it also needs to compare actual time that encoded on MNSC field. I'm tried to make conversion to use UNIX-timestamp for making comparison, but it needs a lot of multiplications and DSP48 usage is grown too much, so decision to create own wall clock/calendar has been made. The samples on how to do it in FPGA has been found. Rightnow I'm making enchanced version of this comparator between income ETI-stream MNSC+TIST and UTC-time, received by GPS. For this I need to make decision on how internal board's clock will be initialized. There is few ways that I see:

I got UBlox LEA-M8F modules to try as clock source. Here is oscillograms of output signals (30.72MHz sine wave and 1PPS pulse). 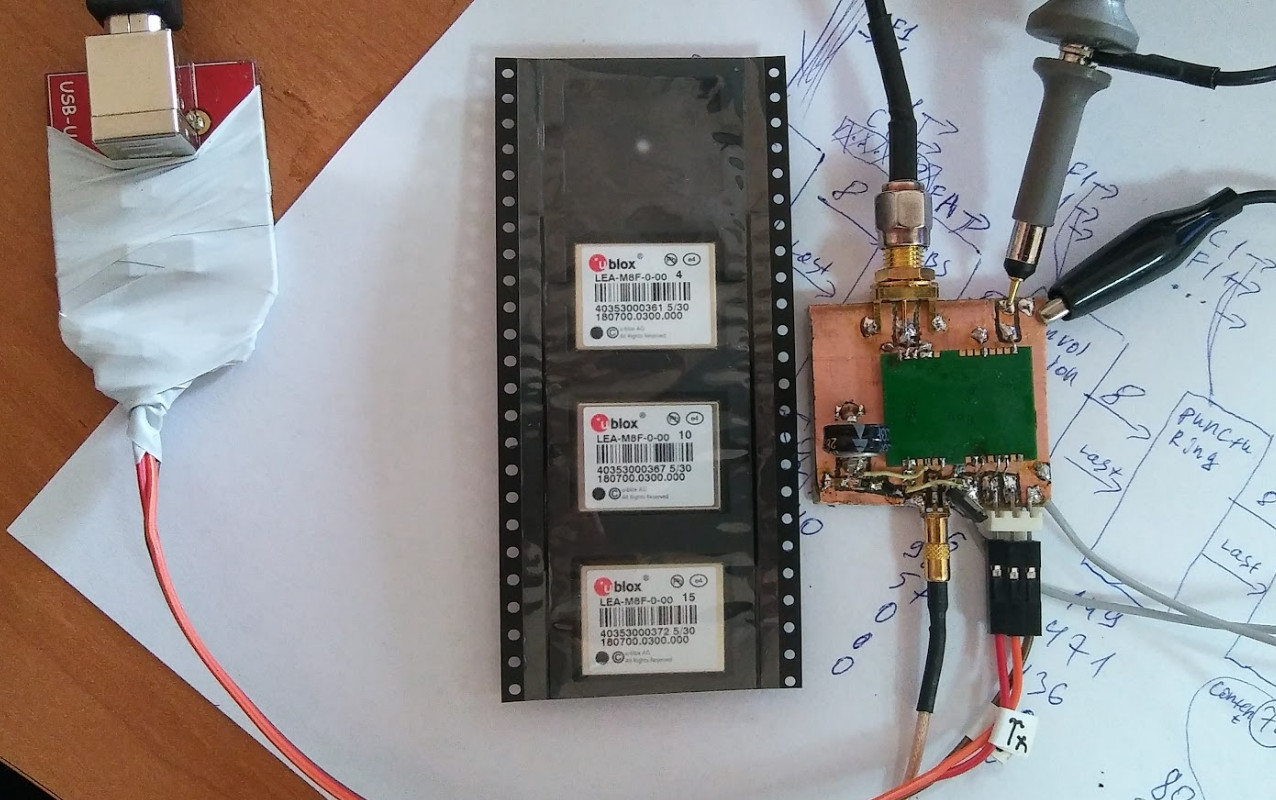 All what is needed for EasyDABv2 is just in small 17x20 mm module. Here is NMEA log and bold-marked values - is what's needed to set wall clock:

Here is some measurements, done by ODR-DAB-CIR tool, that is fine for seeing channel impulse response, so delay between transmitters can be visually seen.

Here is my test table setup:

As result on web-ui there is new parameter: ETI-GPS delay, which can be used to fine-tune delay between timestamp, announced in ETI-stream and actual time to transmit this frame. The more-loaded ETI-frame (higher amount of stations, or higher summar bitrate of them) give lower amount of seconds for buffering. For example: single 128kbps station inside ETI-stream, can be buffered up to ~12 seconds. If You have 6x of 128Kbps stations, You can buffer only up to ~4.5 seconds. Be careful with this parameter. If buffer overflows, then board can hang until it sends this buffer.

Enchanced firmware released. Now TCP reconnection is done when connection stucked and don't send any data for a long time. Also "bottleneck" place in Ethernet->PicoBlaze6->BRAM-FIFO has been replaced to DMA, which does direct: Ethernet->BRAM-FIFO data transfer. So it's possible to get stable transmission even without external SPI-SRAM and with good (low delay) internet connection. More info on firmware's page. 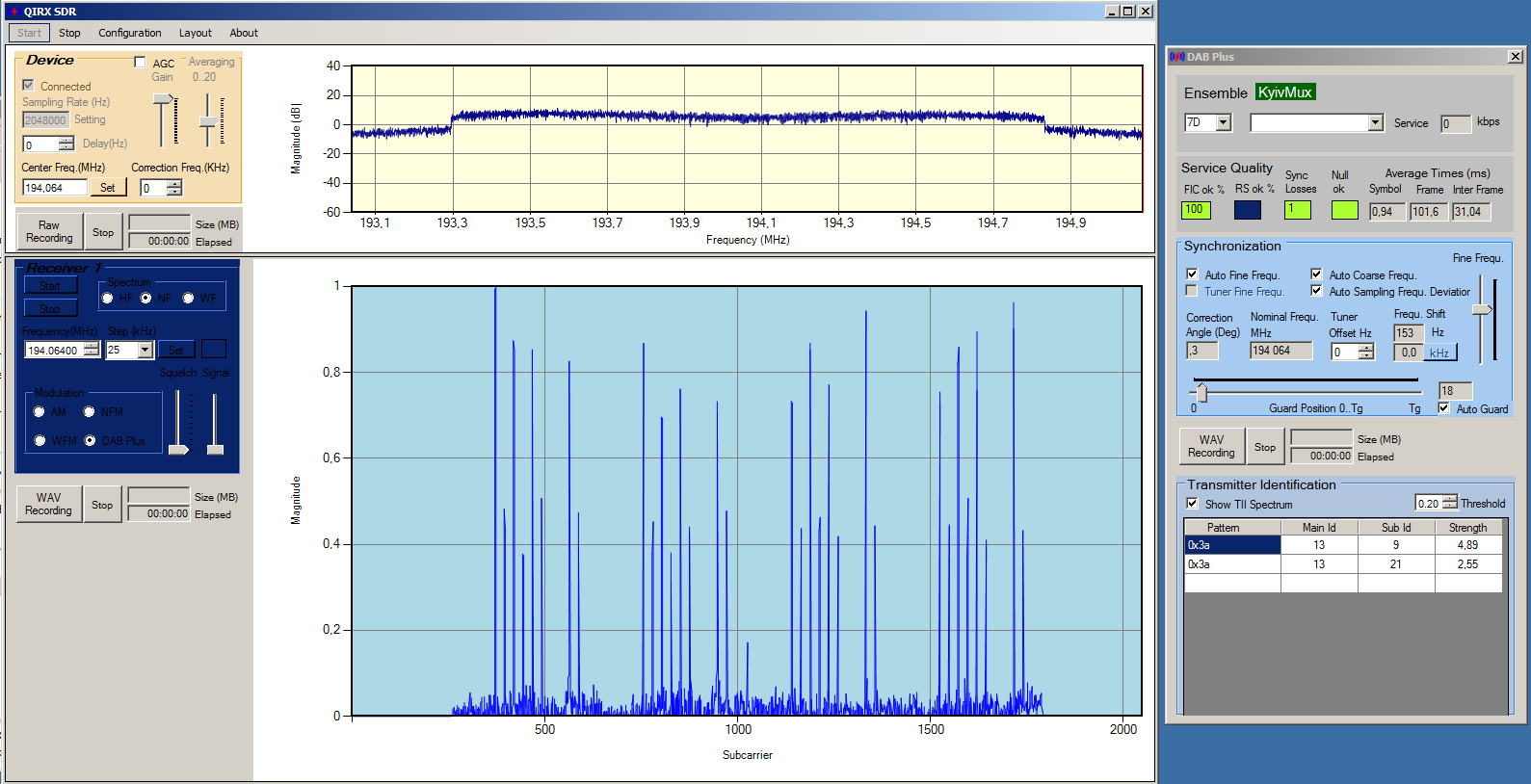 At this demo, there is 2 transmitters with same MainId: 13 (the netwirk id) and each transmitter have it's own SubId: 9 and 21. So there is also difference in strength between 2 transmitters that is detected by the software, so one of them is having higher amplitude and another one - is lower.